Eye-Flex® steel conveyor belts are engineered for applications that require an extremely rugged, long lasting belt. Eye-Flex’s greater strength, carrying capacity, and open flat surface profile is the answer to all your heavy-duty conveying needs, whether you have a new or a replacement application. Eye-Flex® has almost limitless options and its configurations are custom designed to meet your requirements.

Eye-Flex® belts offer flights and side guards to improve and control your process.

Eye-Flex® has a standard construction based on a straight modular form. It is designed and built without spacers or perpendicularly welded under wires. This allows excellent flow-through in applications where no cross-support is required. Eye-Flex® is often used in food processing for its flat conveying surface, open mesh configuration, and ease of cleaning. Eye-Flex® without spacers is also easily repaired with minimal cost.

Eye-Flex® Belt with rings as spacers:

This versatile variation of Eye-Flex® uses rings between the wires to increase the belt gap. By increasing the belt gap, more air will circulate around the bottom of the product. Increasing the product exposure to this additional air flow improves the efficiency of your process.

Eye-Flex® Belt with springs as spacers: 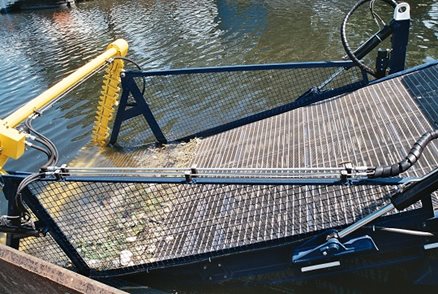 At Wire Belt we undertook a number of capital projects in the lead up to the Olympics, but there is none more unusual than the Eye-Flex® belt being used to clear the waterways around the Olympic Park. Wire Belts’ involvement with this project dates back to November 2006. The Canal and River Trust already had a weed clearing boat, and fundamental to its’ operation was the use of Eye-Flex type wire link belting.

In February 2007, the Canal and River Trust visited Wire Belt to discuss damage and maintenance problems that they were experiencing with belting from their existing supplier. Wire Belts’ John Warters was able to offer the solutions.

By changing its’ construction, the belt was made more resilient to damage and by re-engineering the boat, to use multiple narrow belts, utilization was improved. From an original belt life of two years the new belt, with about 20% repair and replacement, lasted for five years.

On May 23, 2012 the Canal and River Trust, with funding from the Environment Agency, launched two new weed boats that will service London’s waterways during the Olympics and beyond. The rivers and canals in East London formed a backdrop to the London 2012 Games, and keeping them clean and weed-free was more important than ever.

The belts for the new boat were supplied from Wire Belts’ factory, in Northern Germany, directly to the German boat builder.

Over 70 million dollars were invested in regenerating East London’s waterways, creating a wonderful legacy that stretches far beyond the summer of 2012. Rivers and canals are a prominent feature of the Olympic park. 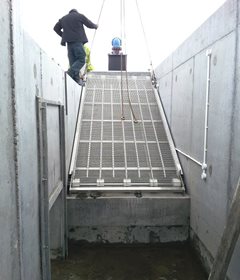 Eye-Flex® belting from Wire Belt, along with Flat-Flex® belting for less demanding situations, is used in a number of weed and debris applications.  These include removing leaves from water channels at fish farms and in protecting small-scale hydro-electric generation installation from debris.

The picture here is of an installation at a hydro-electric generation project. 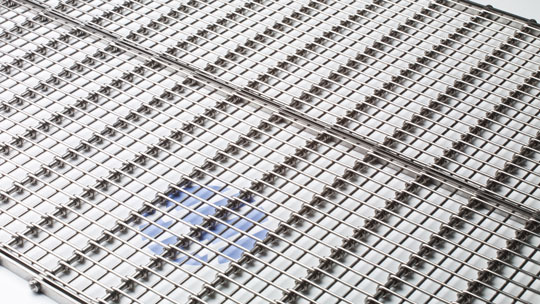 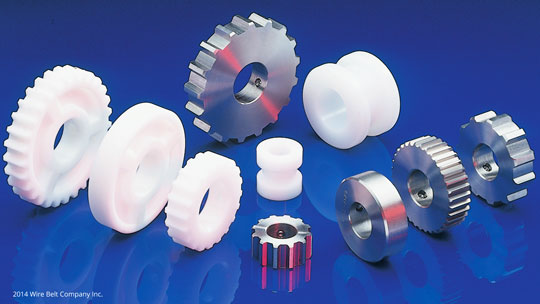 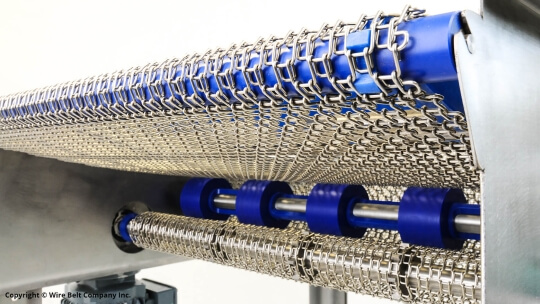